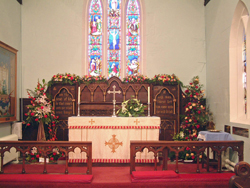 Smalley’s Parish Church of St John the Baptist was built in the late eighteenth century on the site of a much earlier church. The transepts were added in 1844 and the unusual and almost detached tower was added some years later. A 7th century Saxon Cross is part of the porch.

The bell tower was built to house five bells donated by Rev. Charles Kerry and the chime of five bells is said to be the heaviest in England with the largest bell weighing over 2 tons.